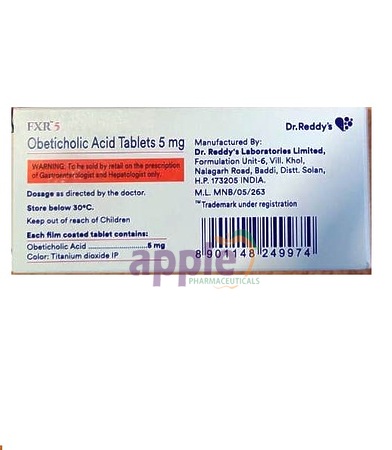 Fxr 5mg is a semi-synthetic bile acid analog that has the chemical formation of 6α-ethyl-chenodeoxycholic acid. Fxr 5mg is used as a medicine to treatment basic biliary cholangitis and is sustain with growth for various other liver diseases and similar disorders.

Primary biliary cirrhosis is an auto resistant action by which the bile ducts and liver are injured more, dominant to fibrosis and cirrhosis. Bile acids grow the risk of injury and fibrosis to the injured bile ducts. Fxr 5mg is an agonist for FXR, a nuclear receptor indicates in the liver and intestine. FXR is a key manager of bile acid, inflammatory, fibrotic, and metabolic pathways. FXR energizing loss of intracellular hepatocyte absorption of bile acids by overcoming de novo combining from cholesterol as well as by high transport of bile acids out of the hepatocytes.

Fxr 5mg is involved in the gastrointestinal tract. The Cmax of ocanat tablet appears at almost 1.5 hours after an oral dose and domain from 28.8-53.7 ng/mL at doses of 5-10mg. The median Tmax for both has been combined with ocanat tablet is about 10 hours.

The volume of the distribution of Fxr 5mg is 618 L.

The metabolism of ocanat tablet appears in the liver. Fxr 5mg is combined with glycine or taurine, followed by excretion into bile. The combines are then consumed in the small intestine and then re-enter the liver via enterohepatic distribution.

The biological half-life of the Fxr 5mg is reported to be 24 hours.

The suggested starting dose of Fxr 5mg is 5 mg once weekly for patients with Child-Pugh Class B or C hepatic breakage or a previous decompensating action.

This treatment of Fxr 5mg is used apart or in mixture treatment for a secure liver disease (primary biliary cholangitis-PBC). This infection gently damages the bile ducts in the liver.

The trial phase of Farnesoid X Receptor Ligand FXR 5mg in Nonalcoholic Steatohepatitis Treatment (FLINT), promoted by NIDDK, impeded early in January 2014, after about half of the 283 subjects had completed the study, when a planned interim analysis showed that a) the primary endpoint had been met and b) lipid abnormalities were detected and being safety concerns. Medication with OCA (25 mg/day for 72 weeks) reported in a highly statistically serious development in the primary histological endpoint, defined as a reduced in the NAFLD action Score of at least two points, with no worsening of fibrosis. 45% (50 of 110) of the treated group had this development related to 21% (23 of 109) of the placebo-treated controls. However, concerns about long term safety issues such as raised cholesterol and adverse cardiovascular events may warrant the concomitant use of statins in OCA-treated patients.