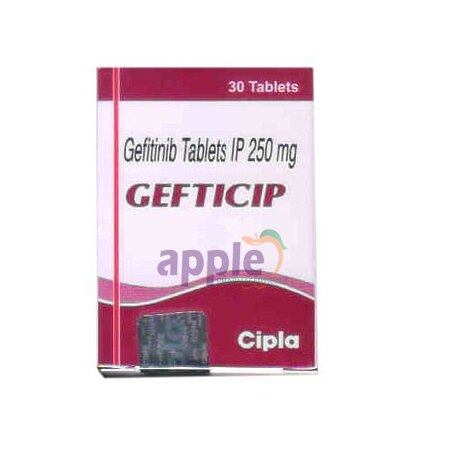 The mean bioavailability of Gefitinib Iressa is 60% The peak plasma concentration time of Gefitinib is reaches within 3 to 7 hours after drug intake Gefitinib Iressa is distributed throughout the body and causes steady state volume of distribution in 1400L The human plasma protein bound of Gefitinib is occurs as 90%. The metabolism of Gefitinib Iressa is occurs through hepatically, by using CYP3A4. Three sections of biotransformation occurs in metabolism of Gefitinib includes as; 1. Metabolism of N-propoxymorpholino group 2. Methoxy substituent on quinazoline demethylation occur 3. Halogenated phenyl group undergoes oxidative defluorination The major active metabolite of Gefitinib is O desmethyl Gefitinib which is formed by CYP2D6 metabolism. Gefitinib Iressa is cleared away with the help of liver, with half life elimination occurring within 48 hours. The steady state plasma concentration is accomplished within 10 days after daily single dose. The elimination of Gefitinib Iressa is occurs through feces with the range of 86% and renal elimination also occurred with less than 4%. Drug- Drug interaction causing alteration in pharmacokinetic properties: Co administration of Gefticip 250mg (Gefitinib 250mg) with strong CYP3A4 inducers like rifampicin causes reduction in mean AUC of Gefitinib Iressa by 83%. Concurrent use of Gefticip 250mg (Gefitinib 250mg) tablet with CYP3A4 inhibitor like itraconazole leads to elevation of AUC by 80%. Co administration of drugs which affecting gastric pH like ranitidine with sodium bicarbonate, which may causes decreasing the AUC by 47%. Metoprolol is a substrate of CYP2D6, increasing the exposure by 30% which is given on day 15 Gefitinib therapy with solid tumors.

The usual prescribed dosage of Gefticip 250mg (Gefitinib 250mg) tablets are 250mg should be given orally as a single dose by administering with or without food continuously. If patient feel difficult for swallow the tablets, must immerse the tablets with 4 to 8 ounces of water and mix it well for relatively 15 minutes. Take the solution immediately through naso-gastric tube.