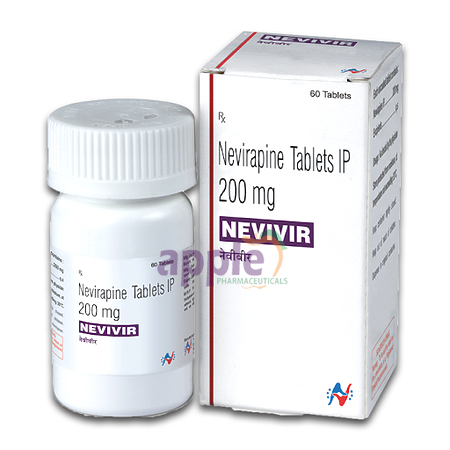 Skin rash; or changes in the location of body fat (specifically in your arms, legs, face, neck, breasts, and waist).

Serious life-threatening in patient, and in some cases fatal hepatotoxicity, involving fulminant and cholestatic hepatitis, hepatic necrosis and hepatic failure, have been reported in patients treated with Nevivir 200mg (Nevirapine 200mg).

Immune reconstitution syndrome has been resulted in patients reacted with combination antiretroviral therapy, including Nevivir 200mg (Nevirapine 200mg). During the initial phase of combination antiretroviral treatment, patients whose immune system behave may grow an inflammatory response to indolent or residual opportunistic infections (such as Mycobacterium avium infection, tuberculosis, cytomegalovirus or Pneumocystis jiroveci pneumonia), which may necessitate further evaluation and treatment.

In animal reproduction has no evidence of adverse problem but there is a severe risk in pregnant women solved to nevirapine.There is a pregnancy disclosure registry that monitors pregnancy outcomes in women exposed to Nevivir 200mg (Nevirapine 200mg) during pregnancy.

There is no information on the Nevivir200mg(Nevirapine 200mg) effects of on milk production. Due to the possible for HIV-1 transmission (in HIV-negative infants), Introduction viral resistance (in HIV-positive infants), and severe adverse reactions in nursing infants, mothers should not breastfeed if they are getting Nevivir 200mg (Nevirapine 200mg)

For adult recommended dose. In combination with other antiretroviral agents the recommended dose for Nevivir 200mg (Nevirapine 200mg) is one 200 mg tablet daily for the first 14 days, followed by one 200 mg tablet twice daily, The 14-day lead-in period with Nevivir 200mg (Nevirapine 200mg) 200 mg daily dosing should be strictly followed as the lead-in period has been observed to decrease the incidence of rash . If rash continue apart from the 14-day lead-in period, do not dose expand to 200 mg twice daily. The 200 mg once-daily dosing drugs should not be continued above 28 days, at which point, an alternative drugs should be desired. For combination administered antiretroviral therapy, The usual dosage and monitoring should be followed. For pediatrics The usual oral dose for pediatric patients 15 days and older : 150 mg/m 2 given once daily for period of 14 days followed by 150 mg/m 2 administered twice daily thereafter. The entire dose for daily should not exceed 400 mg for any patient.