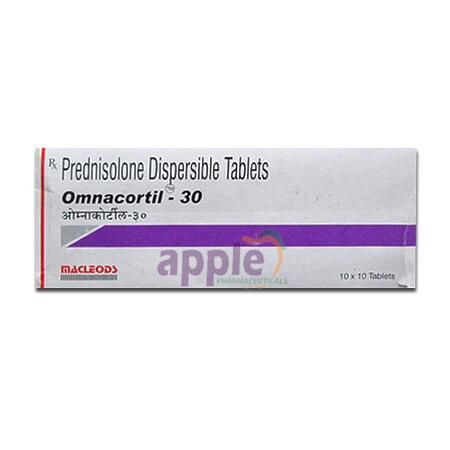 The drug Prednisolone is an effective preventory of the early phase of inflammation, as well as of the development of chronic inflammation. Omnacortil 30mg replaces a chemical made in the body. It decreases or stops the body’s reaction to the allergen. It stops or reduces irritation and swelling. It reduces the body’s harmful response to diseases of the immune system.

Omnacortil 30mg (Prednisolone 30mg) may have high blood glucose levels and fall the symptoms of diabetes. The patients with diabetes should Use the drug with caution.
Tablet may reduce the bone density by lowering the absorption of calcium.
Tablet is necessary with caution in the patients with hepatic injury and impaired Renal function.
Do not use this medication for pregnant women.
This tablet is known to excreted via breast milk in little amounts so not advisable for breast feeder.
Tablet may lower the effect of live or vitiate vaccines.

Omnacortil 30mg (Prednisolone 30mg) Orally Disintegrating Tablets are contraindicated in patients
Hypersensitive to corticosteroids i.e. prednisolone or any components of this product.
Sometime particular of anaphylactoid reactions have appeared in patients getting corticosteroid therapy.

Category C: In studies, Animal reproduction have reveal an adverse reaction on the fetus and there are no sufficient and well-regulated studies in humans, but possible benefits may credential use of the drug needed despite possible risks in pregnant women.

Omnacortil 30mg (Prednisolone 30mg) is very improbable to cause adverse reaction in the infant. Discuss your doctor if you are breastfeeding your child and use the medicine as advised

Take a missed dose immediately you think about it. If time comes closer to your next dose, skip the missed dose and go back to your normal time. Do not have double doses at the same time. Avoid the change of the dose or stop this drug. Discuss with the doctor.