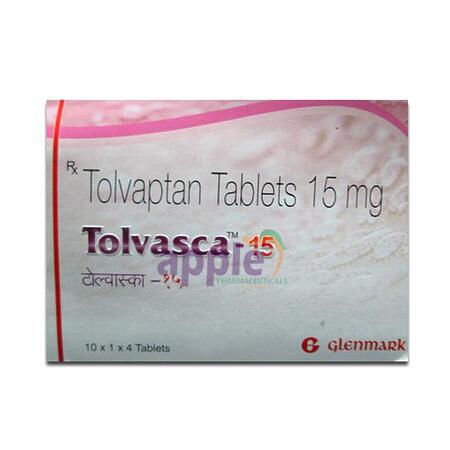 Tolvasca 15mg (Tolvaptan 15mg) is used for the treatment of patients with hyponatremia secondary to syndrome of inappropriate antidiuretic hormone secretion (SIADH).
Tolvasca 15mg (Tolvaptan 15mg)  is also used for hypervolemic and euvolemic hyponatremia (sodium concentration <125 mmol l–1) with heart failure and cirrhosisin patients. In this US country use this medicine frequently.

Hyponat – O is a selective and competitive arginine vasopressin receptor 2 antagonist. Vasopressin acts on the V2 receptors found in the walls of the vasculature and luminal membranes of renal collecting ducts. By stopping V2 receptors in the renal collecting ducts, aquaporins avoid entering themselves into the walls thus preventing water absorption. This action finally results in an rises in urine volume, reduce urine osmolality, and increase electrolyte-free water clearance to reduce intravascular volume and an increase serum sodium levels. Hyponat – O is especially useful for heart failure patients as they have higher serum levels of vasopressin.

* When Tolvaptan interaction with P-gp inhibitors will have reductions in the dose of Hyponat-O 15mg
* Concomitant use of rifampin and Tolvasca 15mg (Tolvaptan 15mg)decrease exposure to tolvaptan by 85%.
* Combination with moderate CYP3A4 inhibitors will increase in exposure of Hyponat-O 15mg.
* Combination of lovastatin, digoxin, furosemide, and hydrochlorothiazide has no clinically relevant impact on the exposure to Tolvasca 15mg (Tolvaptan 15mg)
* Tolvaptanco administration with strong CYP3A4 inhibitors like ketoconazole will have highest labelled dose would be normal to cause an even heavy increase in exposure.

Pregnancy category is C: There are no sufficient and well tolerated studies of Tolvasca 15mg (Tolvaptan 15mg)tablets but can be used during pregnancy only if the possible benefits prove the possible risk to the fetus.

Hyponatremia
Initial: 15 mg PO qDay
Maintenance: May increase to 30 mg qDay after at least 24 hr to achieve the optimal serum sodium level; not to exceed 60 mg/day
Not to exceed 30 days of treatment
Polycystic Kidney Disease
Initial: 45 mg PO taken on waking and 15 mg taken 8 hr later (ie, 60 mg/day) Advice the patients to drink enough water to avoid thirst or dehydration
Administration of Natriseshould be without food
Grape juice should be avoided during therapy with Natrise
Overdose
There is no essential antitoxin for Natriseintoxication. The signs and symptoms of an acute overdose can be expected to be those of extra pharmacologic effect: a increase in serum sodium concentration, polyuria, thirst, and dehydration/hypovolemia. Administrating monotherapy oral doses up to 480 mg and multiple doses up to 300 mg once in a day for 5 days have been well accepted in studies in healthy subjects

Store the Tolvasca 15mg (Tolvaptan 15mg) at 25℃ (77 ℉)
Keep away from the children’s reach.
Dispense only in original containers.

If the patient is missed, then take the tablet dose immediately before the next dose timing arrives or skip the missed dose and continue the regular schedule.
Avoid having of double dose at a time.
Consult the doctor for further details.